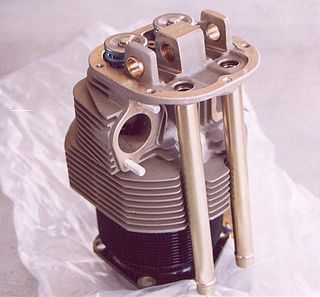 Type of engine (Learn how and when to remove this template message) Main article: Internal combustion engine cooling

Air-cooled engines rely on the circulation of air directly over heat dissipation fins or hot areas of the engine to cool them in order to keep the engine within operating temperatures. In all combustion engines, a great percentage of the heat generated (around 44%) escapes through the exhaust, not through the metal fins of an air-cooled engine (12%). About 8% of the heat energy is transferred to the oil, which although primarily meant for lubrication, also plays a role in heat dissipation via a cooler. Air-cooled engines are used generally in applications which would not suit liquid cooling, as such modern air-cooled engines are used in motorcycles, general aviation aircraft, lawn mowers, generators, outboard motors, pump sets, saw benches and auxiliary power units.

A cylinder from an air-cooled aviation engine, a Continental C85. Notice the rows of fins on both the steel cylinder barrel and the aluminum cylinder head. The fins provide additional surface area for air to pass over the cylinder and absorb heat.

Most modern internal combustion engines are cooled by a closed circuit carrying liquid coolant through channels in the engine block and cylinder head, where the coolant absorbs heat, to a heat exchanger or radiator where the coolant releases heat into the air (or raw water, in the case of marine engines). Thus, while they are not ultimately cooled by the liquid, because of the liquid-coolant circuit they are known as water-cooled. In contrast, heat generated by an air-cooled engine is released directly into the air. Typically this is facilitated with metal fins covering the outside of the Cylinder Head and ...read more