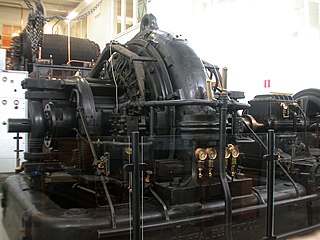 200:kW Alexanderson alternator preserved at the Grimeton radiotelegraphy station, Sweden, the only remaining example of an Alexanderson transmitter.

An Alexanderson alternator is a rotating machine invented by Ernst Alexanderson in 1904 for the generation of high-frequency alternating current for use as a radio transmitter. It was one of the first devices capable of generating the continuous radio waves needed for transmission of amplitude modulation (sound) by radio. It was used from about 1910 in a few "superpower" longwave radiotelegraphy stations to transmit transoceanic message traffic by Morse code to similar stations all over the world.

Although obsolete by the early 1920s due to the development of vacuum-tube transmitters, the Alexanderson alternator continued to be used until World War II. It is on the list of IEEE Milestones as a key achievement in electrical engineering.

After radio waves were discovered in 1887, the first generation of radio transmitters, the spark gap transmitters, produced strings of damped waves, pulses of radio waves which died out to zero quickly. By the 1890s it was realized that damped waves had disadvantages; their energy was spread over a broad frequency bandwidth so transmitters on different frequencies interfered with each other, and they could not be modulated with an audio signal to transmit sound. Efforts were made to invent transmitters that would produce continuous waves, a sinusoidal alternating current at a single frequency. <... ...read more