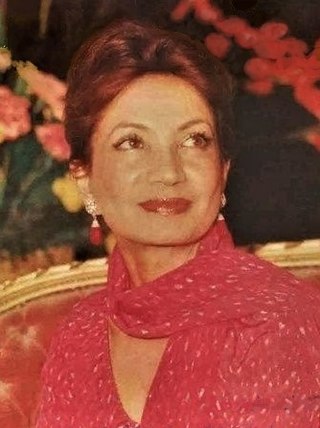 Ashraf ol-Molouk Pahlavi (Persian: اشرف‌الملوک پهلوی‎, Ašraf Pahlavi, 26 October 1919 – 7 January 2016) was the twin sister of Mohammad Reza Pahlavi, the last Shah of Iran (Persia), and a member of the Pahlavi dynasty. She was considered the "power behind her brother" and was instrumental in the 1953 coup that overthrew Prime Minister Mohammad Mosaddegh in favour of strengthening the monarchical rule of the Shah. She served her brother as a palace adviser and was a strong advocate for women's rights. Following the Iranian Revolution in 1979, she lived in exile in France, New York, Paris and Monte Carlo and remained outspoken against the Iranian Islamic Republic.

Ashraf Pahlavi was born in Tehran on 26 October 1919, five hours after her brother Mohammad Reza. Her parents were Reza Pahlavi, a military commander, who would become the Shah of Persia, and Tadj ol-Molouk, the second of his four wives. She had 10 siblings and half-siblings.

In the early 1930s, Ashraf Pahlavi, her older sister Shams, and their mother were among the first significant Iranian women to cease wearing the traditional veil. On 8 January 1936, she and her mother and... ...read more