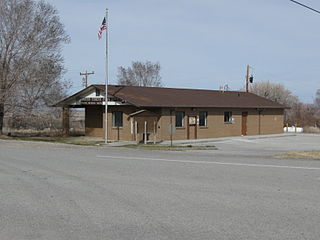 Baker is a census-designated place in southeastern White Pine County, Nevada, United States. It is located 5 miles (8.0:km) east of the main entrance of Great Basin National Park at the junction of State Routes 487 and 488. The town is named after an early settler, George W. Baker. Its population at the 2010 census was 68.

Public education is provided through the White Pine County School District. Baker 3-6 Elementary school is the only school in Baker.

Prominent people from Baker include Calvin Quate, a professor of electrical engineering at Stanford University who is famous for the invention of the atomic force microscope.

In January 1997, Late Show with David Letterman produced a segment on the town, with the show's Biff Henderson touring the area and ending his narrative on Baker with the quote, "It's quiet, peaceful, beautiful and the people are friendly."