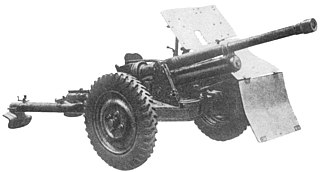 The Bofors 37:mm anti-tank gun was an anti-tank gun designed by Swedish manufacturer Bofors in the early 1930s originally for Swedish use. It was exported to several countries during the 1930s of which several bought licences to produce it themselves. The gun was used in several conflicts but most of its fame comes from its use in the Spanish Civil War and the Winter War where it was used very successfully against light tanks and armored cars among other targets. Beyond its use as an infantry gun it was also used as the main armament in several armored cars and tanks such as the Dutch M39 Pantserwagen and the Polish 7TP to name a few. As the armor of tanks was increased during World War II the gun very quickly became obsolete as an anti-tank gun but was still used effectively as an infantry support gun for the entirety of the war, and well into the Cold War. This was due to its high fire rate, great mobility and effective high explosive shells.

The gun was initially designed by Swedish manufacturer Bofors, mainly for export purposes. The first prototype was built in 1932; the development process continued until 1934. The Netherlands were the first to purchase the gun (order for 12 pieces was placed in 1935) and were followed by many other countries. Licensed copies were produced in Denmark, Finland, the Netherlands and Poland.

The barrel was of monobloc type, with semi-automatic vertical sliding breech block and small muzzle brake. It was mounted on a split trail carriage which had suspension and metal wheels with rubber tires. To give the crew some protection from firearms and shell fragments, the gun was equipped with a 5:mm thick shield, with a folding lower plate.

The Bofors gun saw combat for the first time in Spanish Civil War, where it could easily pierce the armor of contemporary light tanks.

Polish artillerymen during the fight in 1939

The Polish guns were actively used during the German and Soviet invasion of Poland in 1939. ...read more