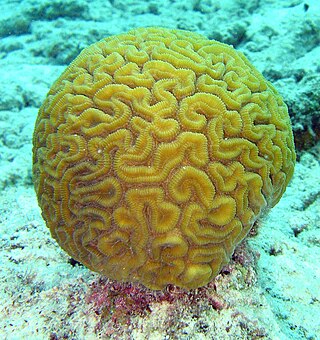 Brain coral is a common name given to various corals in the families Mussidae and Merulinidae, so called due to their generally spheroid shape and grooved surface which resembles a brain. Each head of coral is formed by a colony of genetically identical polyps which secrete a hard skeleton of calcium carbonate; this makes them important coral reef builders like other stony corals in the order Scleractinia.Brain corals are found in shallow warm water coral reefs in all the world's oceans. They are part of the phylum Cnidaria, in a class called Anthozoa or "flower animals". The lifespan of the largest brain corals is 900 years. Colonies can grow as large as 1.8:m (6:ft) or more in height.

Brain corals extend their tentacles to catch food at night. During the day, they use their tentacles for protection by wrapping them over the grooves on their surface. The surface is hard and offers good protection against fish or hurricanes. Branching corals, such as staghorn corals, grow more rapidly, but are more vulnerable to storm damage.Like other genera of corals, brain corals feed on small drifting animals, and also receive nutrients provided by the algae which live within their tissues. The behavior of one of the most common genera, Favia, is semiaggressive; it will sting other corals with its extended sweeper tentacles during the night.

The grooved surface of brain corals has been used by scientists to investigate methods of giving spherical wheels appropriate grip strength.