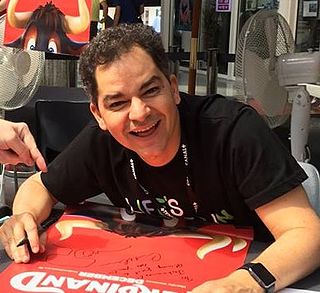 Saldanha was born in Brazil, growing up in Marechal Hermes, Rio de Janeiro. Though he loved cartoons and drawing from an early age, by the time he was an adult, he initially considered a career in computer science, because he did not think a career in art was a viable option. This changed when he became aware of how computer-generated imaging was revolutionizing animation, and discovered the continuing education program at the School of Visual Arts in Manhattan. He entered that program to major in computer animation, saying, "I knew from the first day in class that this was what I wanted to do for the rest of my life". One of his instructors, recognizing his talent, convinced him to enroll in the school's MFA program. Though Saldanha and his wife, Isabella Scarpa, thought this was a risk, they opted to stay in Manhattan so that Saldanha could do so. While at SVA, he completed two prizewinning film shorts that were featured in film festivals around the world. It was also at SVA that Saldanha met MFA instructor and future film directing partner Chris Wedge, who invited Saldanha to join Wedge's company Blue Sky Studios...read more