Clapperboard, Device used to aid in the syncing of audio with a moving image. 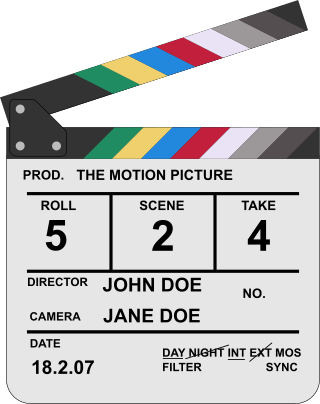 Device used to aid in the syncing of audio with a moving imageThis article is about the equipment used during filming. For the television program, see Clapperboard (TV series). Clapperboard

A clapperboard (also known by various other names including dumb slate) is a device used in filmmaking and video production to assist in synchronizing of picture and sound, and to designate and mark the various scenes and takes as they are filmed and audio-recorded. It is operated by the clapper loader.

When sound and picture are out of synchronization, there is a lip flap occurring.

In the silent era the principal requirement of film stock identification during a day's shoot was the slate.

The clapper as two sticks hinged together was invented by F. W. Thring (father of actor Frank Thring), who later became head of Efftee Studios in Melbourne, Australia. The clapboard with both the sticks and slate together was a refinement of Leon M. Leon (1903–1998) a pioneer sound engineer.

The clapperboard combines a 'chalkboard slate' or acrylic board with 'filmsticks' or 'clappersticks'. The slate displays the name of the production, the scene and "take" about to be performed, and similar information; a camera assistant holds the clapperboard so the slate is in view of the cameras with the Filmsticks already open, speaks out information for the benefit of the audio recording, then claps the filmsticks shut.

Traditional clapperboards consisted of a wooden slate with a hinged filmstick attached to its top. Modern clapperboards generally use a pair of wooden sticks atop either a whiteboard or a translucent acrylic glass slate (the latter being easily legible via the light coming through it from the scene about to be shot). The filmsticks traditionally have diagonally interleaved lines of black and white to ensure a clear visual of the clap in most lighting conditions. In recent years sticks with calibrated color stripes have become available.

Digislates are simply clapperboards with inbuilt electronic boxes displaying SMPTE time code. The timecode displayed on the clapperboard will have been jam synced with the internal clock of the camera so it's easy for an editor to pull the timecode metadata from the video file and sound clip and synchronise them together. However, electronic timecode can drift throughout a shoot day so the Filmsticks on the clapperboard still need to be closed together in order to ensure there's a way of manually synchronising the footage and audio if matching the digital timecode fails.

A clapperboard in use

A verbal identification of the numbers, known either as "voice slate" or "announcement", occurs after sound has reached speed. At the same time or shortly thereafter, the camera will start running, and the clapperboard is then filmed briefly at the start of the 'take' and the filmsticks are clapped sharply as soon as the camera has reached sync speed. Specific procedures vary depending on the nature of the production (documentary, television, feature, commercial, etc.), and the dominant camera assisting regional conventions.

A clapper board is generally used to identify all takes on a production, even takes that do not require synchronization, such as MOS takes, which have no sound. When a slate is used to mark an MOS take, the slate is held half open, with a hand blocking the sticks, or closed, with a hand over the sticks.

The clapper loader (or 2nd AC) is generally responsible for the maintenance and operation of the clapperboard, while the script supervisor is responsible for determining which system will be used and what numbers a given take should have. While these are usually fairly obvious once a system has been agreed upon, the script supervisor is usually considered the final arbiter in the event of an unclear situation.

Sometimes a "tail slate" or end slate is filmed at the end of a take, during which the clapperboard is held upside-down. This is done when the slate was not captured at the start of the take due to the camera being set up for the shot in such a way that the board cannot be captured, for example when a specific focus or frame is set up and cannot be altered until the take is complete. Tail slates are also commonly used when the director makes the decision that clapping a slate at the beginning of the scene would be distracting to the actor, such as when filming a highly emotional performance.