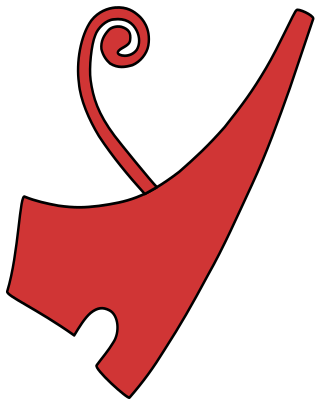 Deshret (Ancient Egyptian: dšrt "Red One") was the formal name for the Red Crown of Lower Egypt and for the desert Red Land on either side of Kemet (Black Land), the fertile Nile river basin. When combined with the Hedjet (White Crown) of Upper Egypt, it forms the Pschent (Double Crown), in ancient Egyptian called the sekhemti.

The Red Crown in Egyptian language hieroglyphs eventually was used as the vertical letter "n" . The original "n" hieroglyph from the Predynastic Period, and the Old Kingdom was the sign depicting ripples of water.

In mythology, the earth deity Geb, original ruler of Egypt, invested Horus with the rule over Lower Egypt. The Egyptian pharaohs, who saw themselves as successors of Horus, wore the deshret to symbolize their authority over Lower Egypt. Other deities wore the deshret too, or were identified with it, such as the protective serpent goddess Wadjet and the creator-goddess of Sais, Neith, who often is shown wearing the Red Crown.

The Red Crown would later be combined with the White Crown of Upper Egypt to form the Double Crown, symbolizing the rule over the whole country, "The Two Lands" as the Egyptians expressed it.

As concerns deshret, the Red Land which comprised the deserts and foreign lands surrounding Egypt, Seth was its lord. It was considered a region of chaos, without law and full of dangers.

No Red Crown has been found. Several ancient representations indicate it was woven like a basket from plant fiber such as grass, straw, flax, palm leaf, or reed.

The Red Crown frequently is mentioned in texts and depicted in reliefs and statues. An early example is the depiction of the victorious pharaoh wearing the deshret on the Narmer Palette. A label from the reign of Djer records a royal visit to the shrine of the Deshret which may have been located at Buto in the Nile delta.

The fact that no crown has ever been found buried with any of the pharaohs, even in relatively intact tombs, might suggest that it was passed from one regent to the next, much as in present-day monarchies.

Deshret, the ancient Egyptian Red Crown, is one of the oldest Egyptian hieroglyphs. As an iconographic element, it is used on the famous palette of Pharaoh Narmer as the "Red Crown of the Delta", the Delta being Lower Egypt.

The first usage of the Red Crown was in iconography as the symbol for Lower Egypt with the Nile Delta, horizontal letter 'n', Gardiner no. 35,

. Later it came to be used in the Egyptian language as an alphabetic uniliteral, vertical form for letter "n" as a phoneme or preposition. It became functional in running hieroglyphic texts, where either the horizontal or vertical form preposition satisfied space requirements.

Both the vertical and horizontal forms are prepositional equivalents, with the horizontal letter n, the N-water ripple (n hieroglyph) being more common, as well as more common to form parts of Egyptian language words requiring the phoneme 'n'.

One old use of the red crown hieroglyph is to make the word: 'in'!, (formerly an-(a-with dot)-(the "vertical feather" hieroglyph a, plus the red crown). Egyptian "in" is used at the beginning of a text and translates as: Behold!, or Lo!, and is an emphatic.

The Red Crown is also used as a determinative, most notably in the word for deshret. It is also used in other words or names of gods.