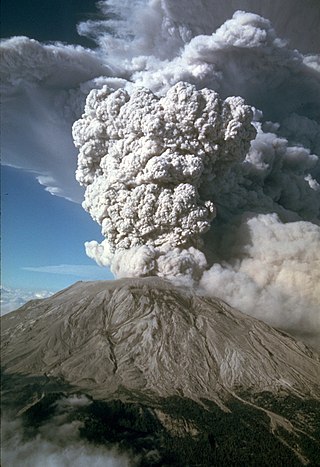 Ejecta (from the Latin: "things thrown out", singular ejectum) are particles ejected from an area. In volcanology, in particular, the term refers to particles including pyroclastic materials (tephra) that came out of a volcanic explosion and magma eruption volcanic vent, or crater, has traveled through the air or under water, and fell back on the ground surface or on the ocean floor.

Typically in volcanology, ejecta is a result of explosive eruptions. In an explosive eruption, large amounts of gas are dissolved in extremely viscous lava; this lava froths to the surface until the material is expelled rapidly due to the trapped pressure. Sometimes in such an event a lava plug or volcanic neck forms from lava that solidifies inside a volcano's vent, causing heat and pressure to build up to an extreme with no way to escape. When the blockage breaks and cannot sustain itself any longer, a more violent eruption occurs, which allows materials to be ejected out of the volcano.

Ejecta can consist of:

In planetary geology, the term "ejecta" includes debris ejected during the formation of an impact crater.

When an object massive enough hits another object with enough force, it creates a shockwave that spreads out from the impact. The object breaks and excavates into the ground and rock, at the same time spraying material known as impact ejecta. This ejecta is distributed outward from the crater's rim onto the surface as debris; it can be loose material or a blanket of debris, which thins at the outermost regions.

If enough ejecta are deposited around a... ...read more

Ejecta blanket ... An ejecta blanket is a generally symmetrical apron of ejecta that surrounds an impact crater; it is layered thickly at the crater's rim and thin to discontinuous...

Ejecta (disambiguation) ... Ejecta is material that is ejected from an area, such as from a volcanic or stellar eruption. Ejecta may also refer to: Ejecta (band), former name of the...

Excretion ... along with fecal matter. The excreted material may be called ejecta. In pathology the word ejecta is more commonly used. Burping Countercurrent exchange Defecation...

Volcanic Explosivity Index ... each interval on the scale representing a tenfold increase in observed ejecta criteria, with the exception of between VEI-0, VEI-1 and VEI-2. With indices...

SN 1987A ... for dust condensation in the ejecta. Although it had been thought more than 50 years ago that dust could form in the ejecta of a core-collapse supernova...

Ray system ... A ray system comprises radial streaks of fine ejecta thrown out during the formation of an impact crater, looking somewhat like many thin spokes coming...

Volcanic cone ... Volcanic cones are among the simplest volcanic landforms. They are built by ejecta from a volcanic vent, piling up around the vent in the shape of a cone with...

Geology of the Moon

5 months ago
This article is copied from an article on Wikipedia® - the free encyclopedia created and edited by its online user community. This article is distributed under the terms of GNU Free Documentation License.