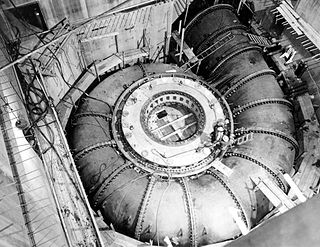 Type of water turbine Francis inlet scroll at the Grand Coulee Dam Side-view cutaway of a vertical Francis turbine. Here water enters horizontally in a spiral shaped pipe (spiral case) wrapped around the outside of the turbine's rotating runner and exits vertically down through the center of the turbine.

The process of arriving at the modern Francis runner design took from 1848 to approximately 1920. It became known as the Francis turbine around 1920, being named after British-American engineer James B. Francis who in 1848 created a new turbine design.

Francis turbines are primarily used for electrical power production. The power output of the electric generators generally ranges from just a few kilowatts up to 1000 MW, though mini-hydro installations may be lower. The best performance is seen when the head height is between 100–300 metres (330–980:ft). Penstock (input pipes) diameters are between 1 and 10:m (3.3 and 32.8:ft). The speed ranges of different turbines units are from 70 to 1000:rpm. A wicket gate around the outside of the turbine's rotating runner controls the rate of water flow through the turbine for different power production rates. Francis turbines are usually mounted with a vertical shaft, to isolate water from the generator. This also facilitates installation and maintenance.