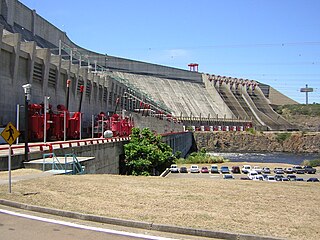 The Simón Bolívar Hydroelectric Plant, also Guri Dam (Spanish: Central Hidroeléctrica Simón Bolívar or Represa de Guri), is a concrete gravity and embankment dam in Bolívar State, Venezuela, on the Caroni River, built from 1963 to 1969. It is 7,426 metres long and 162 m high. It impounds the large Guri Reservoir (Embalse de Guri) with a surface area of 4,250 square kilometres (1,641:sq:mi).

The Guri Reservoir that supplies the dam is one of the largest on earth. The hydroelectric power station was once the largest worldwide in terms of installed capacity, replacing Grand Coulee HPP, but was surpassed by Brazil and Paraguay's Itaipu.

The dam and reservoir as seen from space.

Technical and economic feasibility studies were begun in 1961, conducted by the Harza Engineering Company. An international consortium of six firms was awarded the contract for the construction of the plant, including four United States companies participating under the Alliance for Progress. In 1963, construction began for the hydroelectric power station Guri in the Necuima Canyon, about 100 kilometers upstream from the mouth of the Caroní River in the Orinoco. By 1969, a 106 m high and 690 m long dam with the official name of Central Hidroeléctrica Simón Bolívar (previously named Central Hidroeléctrica Raúl Leoni from 1978 to 2000) had been built. It created a reservoir which is the largest fresh water body of water in Venezuela and one of the largest man-made blackwater lakes ever created, with its water level at 215 metres above sea level. The power station had a combined installed capacity of 1750 megawatts (MW). By 1978, the capacity had been upgraded to 2065 MW, generated by ten turbines.

<... ...read more
This article is copied from an article on Wikipedia® - the free encyclopedia created and edited by its online user community. This article is distributed under the terms of GNU Free Documentation License.