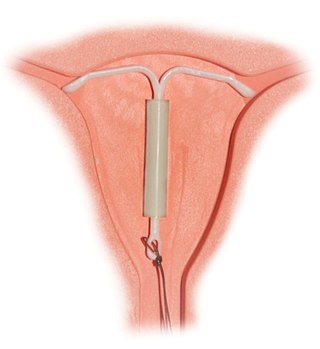 This article is about hormone-based IUDs. For copper-based, see Copper IUDs.

Intrauterine system (IUS) with progestogen, sold under the brand name Mirena among others, is an intrauterine device that releases the hormone levonorgestrel into the uterus. It is used for birth control, heavy menstrual periods, and to prevent excessive build of the lining of the uterus in those on estrogen replacement therapy. It is one of the most effective forms of birth control with a one-year failure rate around 0.2%. The device is placed in the uterus and lasts three to seven years. Fertility often returns quickly following removal.

Side effects include irregular periods, benign ovarian cysts, pelvic pain, and depression. Rarely uterine perforation may occur. Use is not recommended during pregnancy but is safe with breastfeeding. The IUD with progestogen is a type of long-acting reversible birth control. It works by thickening the mucus at the opening of the cervix, stopping the buildup of the lining of the uterus, and occasionally preventing ovulation.

The IUD with levonorgestrel was first approved for medical use in 1990 in Finland and in the United States in 2000. It is on the World Health Organization's List of Essential Medicines, the safest and most effective medicines needed in a health system. More than 120 countries have approved the device and it is used by more than 10 million women.