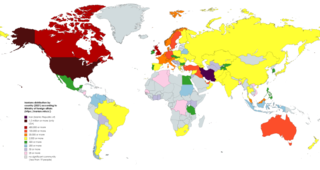 Most Iranian Americans arrived in the United States after 1979, as a result of the Iranian Revolution and the fall of the Persian monarchy, with over 40% settling in California, specifically Los Angeles. Unable to return to Iran, they have created many distinct ethnic enclaves, such as the Los Angeles Tehrangeles community. The Iranian American community has become successful, with many becoming doctors, engineers, lawyers, and tech entrepreneurs.

Based on a 2012 announcement by the National Organization for Civil Registration, an organization of the Ministry of Interior of Iran, the United States has the highest number of Iranians outside the country. On 21 of February 2021 the Ministry of Foreign Affairs (Iran) published new statistics showing that 1,500,000 Iranians who were born in Iran, are living in USA accourding to the most recent data. However this number only represents Iranian born population who moved to USA at some point and does not include the number of US born Iranians and other groups with Iranian ancestors.