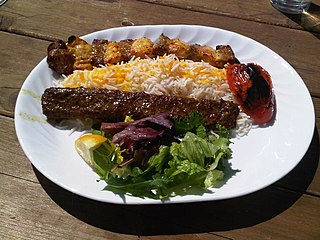 Iranian cuisine (Persian: آشپزی ایرانی āšpazi-e iranī) comprises the cooking traditions of Iran. The term Persian cuisine is used as well due to the fact that Iran is historically known as Persia in the West, even though ethnic Persians are only one of Iran's native ethnic groups that have contributed to the culinary culture.

Typical Iranian main dishes are combinations of rice with meat, vegetables, and nuts. Herbs are frequently used, along with fruits such as plums, pomegranates, quince, prunes, apricots, and raisins. Characteristic Iranian flavorings such as saffron, dried lime and other sources of sour flavoring, cinnamon, turmeric, and parsley are mixed and used in various dishes.

Outside Iran, Iranian cuisine is especially found in cities of the Iranian diaspora such as London, the San Francisco Bay Area, Toronto, Houston and especially Los Angeles and its environs.