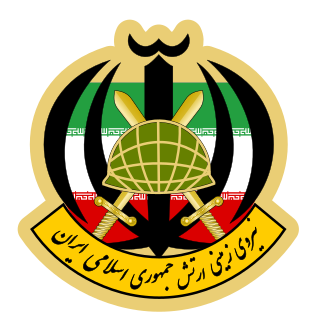 Land service branch of the Islamic Republic of Iran Army

In Iran, it is also called Artesh, (ارتش) which is Persian for "army." In 2007, the regular Iranian Army was estimated to have 357,000 personnel (167,000 conscripts and 190,000 professionals) plus around 350,000 reservists for a total of 700,000 soldiers according to the CSIS. It is the 9th largest ground force in the world, the 9th largest armoured force globally and possesses the biggest Army Aviation fleet in the Middle East. Conscripts serve for 21 months and have professional military training.

Iran has two parallel land forces with some integration at the command level: the regular Artesh (Army), and the Islamic Revolutionary Guard Corps, also known as the Sepaah (IRGC).

A national army of sorts has existed in Iran since the establishment of the Persian Empire. National armies usually appeared throughout the country's points of strength, while in times of weakness mercenaries and conscript armies were recruited temporarily from fiefdoms. The original core of full-time troops and imperial body guards were called the Immortals, these were established in 580:BC by Cyrus the Great. These were replaced by the Junishapur Shâhanshâh (King of Kings) in the Sassanid Dynasty after a period of disunity and chaos in the country. Following the Islamic invasion of Iran and eventual resurgence of Iranian dynasties a new full-time army was formed by the name of Qezelbash in the Safavid Dynasty. The Qajar period saw several attempts to re-model the... ...read more