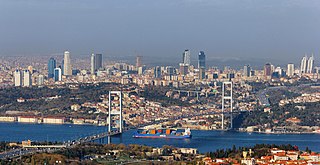 Istanbul (/ˌɪstænˈbʊl/ IST-an-BUUL, US also /ˈɪstænbʊl/ IST-an-buul; Turkish: İstanbul (listen)), formerly Constantinople and in classical antiquity, Byzantium, is the largest city in Turkey and the country's economic, cultural and historic center. The city straddles the Bosphorus strait, and lies in both Europe and Asia, with a population of over 15 million residents, comprising 19% of the population of Turkey. Istanbul is the most populous city in Europe, and the world's fifteenth-largest city.

Founded as Byzantion by Megarian colonists in 657 BCE, and renamed by Constantine the Great first as New Rome (Nova Roma) during the official dedication of the city as the new Roman capital in 330 CE, which he soon afterwards changed as Constantinople (Constantinopolis), the city grew in size and influence, becoming a beacon of the Silk Road and one of the most important cities in history. It served as an imperial capital for almost sixteen centuries, during the Roman/Byzantine (330–1204), Latin (1204–1261), Byzantine (1261–1453), and Ottoman (1453–1922) empires. It was instrumental in the advancement of Christianity during Roman and Byzantine times, before its transformation to an Islamic stronghold following the Fall of Constantinople in 1453 CE. In 1923, after the ...read more

Names of Istanbul ... The city of Istanbul has been known by a number of different names. The most notable names besides the modern Turkish name are Byzantium, Constantinople...

Istanbul Metro ... The Istanbul Metro (Turkish: İstanbul metrosu) is a rapid transit railway network that serves the city of Istanbul, Turkey. It is operated by Metro Istanbul...

Istanbul Canal ... The Istanbul Canal (Turkish: Kanal İstanbul) is a project for the artificial sea-level waterway, which is planned by Turkey on East Thrace, connecting...

History of Istanbul ... The city today known as Istanbul has been the site of human settlement for approximately three thousand years. Thracian tribes founded a settlement here;...