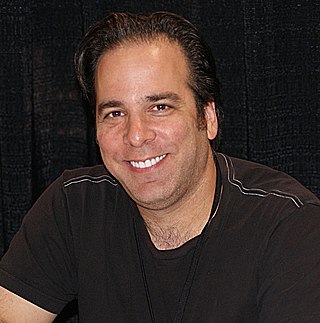 James Palmiotti (born August 14, 1961) is an American writer and inker of comic books, who also does writing for games, television and film.

Palmiotti attended the High School of Art and Design in New York City.

Palmiotti started at Marvel Comics in 1991, inking titles such as the Punisher, Ghost Rider, The Nam and the Marvel 2099 line, Palmiotti has accumulated extensive inking and writing credits and has often inked the work of his friend and collaborator Joe Quesada, notably on Ash (which they co-created, along with Painkiller Jane) and Daredevil (esp. the 'Guardian Devil' arc penned by Kevin Smith). He also worked for Dark Horse Comics, as the inker during the Doug Mahnke run on X. He inked Paul Gulacy on Shang-Chi: Master of Kung Fu, Punisher and Catwoman. He inked Steve Dillon on Punisher, as well as Brad Walker's pencil's on the DC Comics miniseries Secret Six - Six Degrees of Separation.

In 1994, he and Quesada formed a publishing company, Event Comics, and co-created Ash, a firefighter with superpowers, Painkiller Jane, a female cop with healing powers, Kid Death and Fluffy, about a boy and his pet robot dog and 22 Brides, about a group of girls that run the New York underworld. . In 1998, Event Comics was contracted to do several books for Marvel Comics, dubbed ...read more