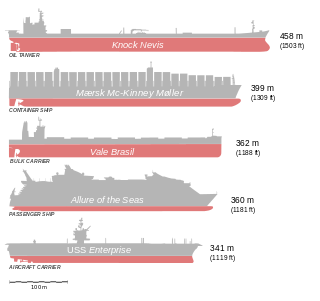 The world's longest ships are listed according to their overall length (LOA), which is the maximum length of the vessel measured between the extreme points in fore and aft. In addition, the ships' deadweight tonnage (DWT) and/or gross tonnage (GT) are presented as they are often used to describe the size of a vessel.

The ships are listed by type. Only ship types for which there exist a ship longer than 300 metres (1,000:ft) are included. For each type, the list includes current record-holders either as individual ships, ship classes or standard designs, up to four runner-ups, and all longer ships that have been scrapped.

The list does not include non-self-propelled floating structures such as the 488:m (1,601:ft) long Prelude FLNG.

This is a dynamic list and may never be able to satisfy particular standards for completeness. You can help by adding missing items with reliable sources.

Other longest ships of their type.