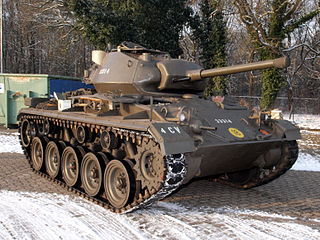 The M24 Chaffee (officially Light Tank, M24) is an American light tank used during the later part of World War II; it was also used in post–World War II conflicts including the Korean War, and by the French in the War in Algeria and the First Indochina War. In British service it was given the service name Chaffee after the United States Army General Adna R. Chaffee Jr., who helped develop the use of tanks in the United States armed forces. M24s were mostly removed from U.S. and NATO armies by the 1960s, but remained in service with some Third World countries.

British combat experience in the North African campaign identified several shortcomings of the M3 Stuart light tank, especially the performance of its 37 mm cannon. A 75:mm gun was experimentally fitted to a Howitzer Motor Carriage M8 – an M3 tank with a larger turret – and trials indicated that a 75:mm gun on the M5 light tank development of the M3 was possible. The M3/M5 design was dated though, and the 75:mm gun reduced storage space.

The T7 light tank design, which was initially seen as a replacement, grew in weight to more than 25 short tons taking it out of the light tank classification, and so was designated as the Medium Tank M7. The weight increase without increased power gave it unsatisfactory performance; the program was stopped in March 1943 to allow standardization on a single medium tank – the M4 medium. This prompted the Ordnance Committee to issue a specification for a new light tank, with the same powertrain as the M5A1 but armed with a 75:mm gun.

In April 1943, the Ordnance Corps, together with Cadillac (who manufactured the M5), started work on the new project, designated Light Tank T2... ...read more