Middle Ages, Period of European history from the 5th to the late 15th-century. 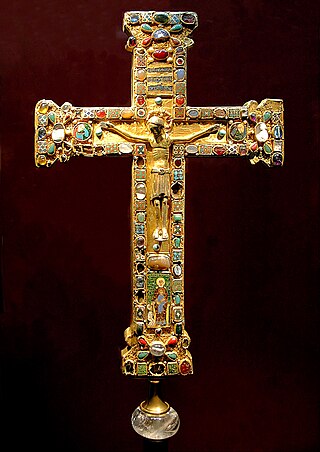 Period of European history from the 5th to the late 15th-century This article is about medieval Europe. For a global history of the period between the 5th and 15th centuries, see Post-classical history. For other uses, see Middle Ages (disambiguation). "Medieval times" redirects here. For the dinner theatre, see Medieval Times. The Cross of Mathilde, a crux gemmata made for Mathilde, Abbess of Essen (973–1011), who is shown kneeling before the Virgin and Child in the enamel plaque. The figure of Christ is slightly later. Probably made in Cologne or Essen, the cross demonstrates several medieval techniques: cast figurative sculpture, filigree, enamelling, gem polishing and setting, and the reuse of Classical cameos and engraved gems.

Population decline, counterurbanisation, the collapse of centralized authority, invasions, and mass migrations of tribes, which had begun in Late Antiquity, continued into the Early Middle Ages. The large-scale movements of the Migration Period, including various Germanic peoples, formed new kingdoms in what remained of the Western Roman Empire. In the 7th century, North Africa and the Middle East—once part of the Byzantine Empire—came under the rule of the Umayyad Caliphate, an Islamic empire, after conquest by Muhammad's successors. Although there were substantial changes in society and politic... ...read more

Middle age ... the exact range is disputed, most sources[by whom?] place middle adulthood between the ages of 35-65. This phase of life is marked by gradual physical...

France in the Middle Ages

Women in the Middle Ages

Timeline of the Middle Ages

Timeline of the Middle Ages ... from the 5th to 15th centuries, loosely corresponding to the Old World Middle Ages, intermediate between Late Antiquity and the early modern period. Timeline...

England in the Middle Ages

Crisis of the Late Middle Ages

Agriculture in the Middle Ages

Infantry in the Middle Ages

Britain in the Middle Ages

Dictionary of the Middle Ages

Christianity in the Middle Ages

Spain in the Middle Ages