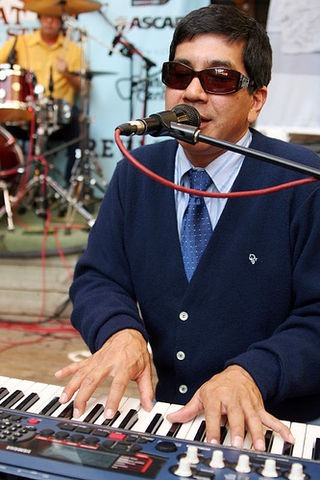 Mark Ramos Nishita (born February 10, 1960), known professionally as Money Mark, is an American producer and musician, best known for his collaborations with the Beastie Boys from 1992 until 2011.

Born in Detroit to a Japanese-Hawaiian father and a Chicano mother, Nishita moved with his family to Los Angeles, California when he was six.

His first album Mark's Keyboard Repair (1995), was made up of keyboard driven pop-funk songs recorded at demo quality. Guy Ritchie used a song from the album in Lock Stock and Two Smoking Barrels. This was followed up by the Third Version EP in 1996 and Push the Button in 1998, for which Mark received critical praise. Whereas his 1996 EP was similar to his debut, Push the Button was extremely eclectic, combining aspects of rock music and pop with soul, funk and hip hop. This LP was met with good reviews, as was his 2001 follow up Change is Coming which had a tropical yet danceable disco and funk sound.

Mark met the Beastie Boys during their migration to the West Coast, through mutual friend Mario Caldato Jr., who asked Mark (who was working as a carpenter) to fix the wooden gate at the entrance of the property where the band were staying when they were recording Paul's Boutique. He helped them build a studio, and quickly became a principal collaborator. He performed, wrote, and collaborated on every Beastie Boys album from 1992's Check Your Head to the group's final album, 2011's Hot Sauce Committee Part Two. Mark co-authored the Grammy Award winning album The Mix-Up.

Money Mark contributed the keyboard phrase that opens and underpins "Where It's At" from ...read more