Pregnancy, Time when children develop inside the mother's body before birth. 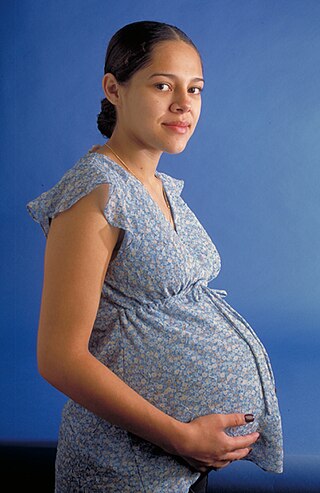 Pregnancy, also known as gestation, is the time during which one or more offspring develops inside a woman. A multiple pregnancy involves more than one offspring, such as with twins. Pregnancy usually occurs by sexual intercourse, but can occur through assisted reproductive technology procedures. A pregnancy may end in a live birth, a spontaneous miscarriage, an induced abortion, or a stillbirth. Childbirth typically occurs around 40:weeks from the start of the last menstrual period (LMP). This is just over nine:months (gestational age)—where each month averages 31 days. When using fertilization age it is about 38 weeks. An embryo is the developing offspring during the first eight weeks following fertilization, (ten weeks' gestational age) after which, the term fetus is used until birth. Signs and symptoms of early pregnancy may include missed periods, tender breasts, morning sickness (nausea and vomiting), hunger, and frequent urination. Pregnancy may be confirmed with a pregnancy test.

Pregnancy is divided into three trimesters, each lasting for approximately 3 months. The first trimester includes conception, which is when the sperm fertilizes the egg. The fertilized egg then travels down the Fallopian tube and attaches to the inside of the uterus, where it begins to form the embryo and placenta. During the first trimester, the possibility of miscarriage (natural death of embryo or fetus) is at its highest. Around the middle of the second trimester, movement of the fetus may be felt. At 28 weeks, more than 90% of babies can survive outside of the uterus if ...read more

Pregnancy test ... A pregnancy test is used to determine whether a woman is pregnant. The two primary methods are: 1) testing for human pregnancy hormone (human chorionic...

Pregnancy from rape ... Pregnancy is a potential result of rape. It has been studied in the context of war, particularly as a tool for genocide, as well as other unrelated contexts...

Abortion ... Abortion is the termination of a pregnancy by removal or expulsion of an embryo or fetus. An abortion that occurs without intervention is known as a miscarriage...

Male pregnancy ... Male pregnancy is the incubation of one or more embryos or fetuses by male members of some species. Most species that reproduce by sexual reproduction...

3 months ago
This article is copied from an article on Wikipedia® - the free encyclopedia created and edited by its online user community. This article is distributed under the terms of GNU Free Documentation License.