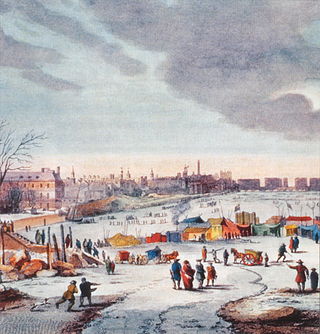 The River Thames frost fairs were held on the tideway of the River Thames in London, England in some winters, starting at least as early as the late 7th century until the early 19th century. Most were held between the early 17th and early 19th centuries during the period known as the Little Ice Age, when the river froze over most frequently. During that time the British winter was more severe than it is now, and the river was wider and slower, further impeded by the 19 piers of the medieval Old London Bridge which were removed in 1831.

Even at its peak, in the mid-17th century, the Thames in London froze less often than modern legend sometimes suggests, never exceeding about one year in ten except for four winters between 1649 and 1666. From 1400 until the removal of the medieval London Bridge in 1835, there were 24 winters in which the Thames was recorded to have frozen over at London. The Thames freezes over more often upstream, beyond the reach of the tide, especially above the weirs, of which Teddington Lock is the lowest. The last great freeze of the higher Thames was in 1962–63.

Frost fairs were a rare event even in the coldest parts of the Little Ice Age. Some of the recorded frost fairs were in 695, 1608, 1683-4, 1716, 1739–40, 1789, and 1814. Recreational cold weather winter events were far more common elsewhere in Europe, for example in the Netherlands. These events in other countries as well as the winter festivals and carnivals around the world in present times can also be considered frost fairs. However, very few of them have actually used that title.

During the Great Frost of 1683–84, the most severe frost recorded in England, the Thames was completely frozen for two months, with the ice reaching a thickness of 11 inches (28:cm) in London. Solid ice was reported extending for miles off the coasts of the southern North Sea (England, France and the Low Countries), causing severe problems for shipping and preventing the use of many harbours.