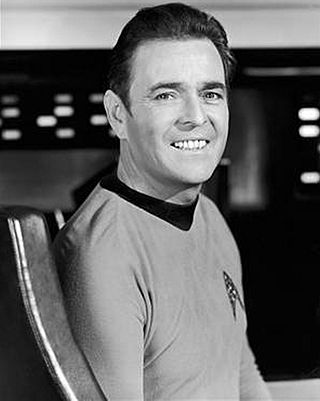 Simon Pegg has assumed the character and appeared in the Star Trek reboot (2009) and its sequels, Star Trek Into Darkness (2013) and Star Trek Beyond (2016).

Doohan was cast as the Enterprise engineer for the second Star Trek pilot, "Where No Man Has Gone Before" (1966) on the recommendation of that episode's director, James Goldstone, who had worked with him before. The character almost did not make it to the show after series creator Gene Roddenberry sent Doohan a letter informing him, "We don't think we need an engineer in the series". Only through the intervention of Doohan's agent did the character remain.

Doohan tried a variety of accents for the part and decided to use a Scottish accent on the basis that he thought Scottish people make the best engineers. Doohan himself chose Scotty's first name, Montgomery (Doohan's own middle name), in honor of his maternal grandfather James Montgomery. In a third-season production memo, Roddenberry said Doohan "is capable of handling anything we throw at him" and that the "dour Scot" works better when being protective of the ship's engines.