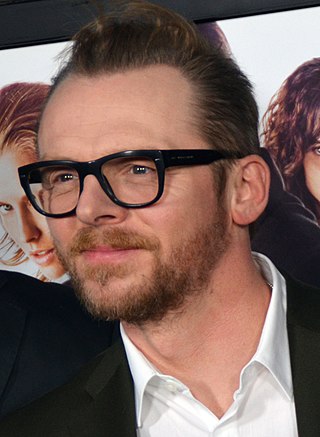 Simon John Pegg (né Beckingham; born 14 February 1970) is an English actor, comedian, screenwriter, and producer. He came to public prominence in the UK as the co-creator of the Channel 4 sitcom Spaced, directed by Edgar Wright. He went on to co-write and star in the Three Flavours Cornetto film trilogy: Shaun of the Dead (2004), Hot Fuzz (2007), and The World's End (2013). He and Nick Frost wrote and starred in the sci-fi film Paul (2011).

Pegg is one of the few performers to have achieved what Radio Times calls "the Holy Grail of nerd-dom", playing popular supporting characters in Doctor Who (2005), Star Trek as Montgomery "Scotty" Scott (2009–2016), and Star Wars: The Force Awakens (2015). He currently stars as Benji Dunn in the Mission: Impossible film series (2006–present), and he played the Chamberlain in The Dark Crystal: Age of Resistance (2019).

Pegg was born and raised in Brockworth, Gloucestershire, the son of Gillian Rosemary (née Smith), a former civil servant, and John Henry Beckingham, a jazz musician and keyboard salesman. His parents divorced when he was seven and he took the surname of his stepfather (Pegg) after his mother remarried. Pegg attended Castle Hill Primary School, Brockworth Comprehensive Secondary School, and The King's School, Gloucester....read more