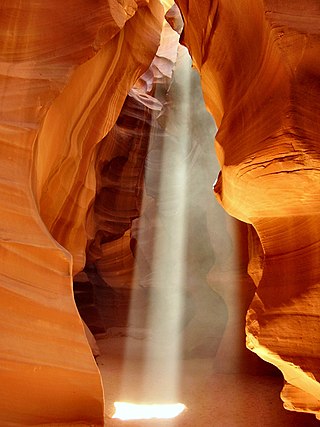 A beam of sunlight in Upper Antelope Canyon

A slot canyon is a long, narrow, deep and tortuous channel or drainageway with sheer rock walls that are typically eroded into either sandstone or other sedimentary rock. A slot canyon has depth-to-width ratios that typically exceed 10:1 over most of its length and can approach 100:1. The term is especially used in the semiarid southwestern United States and particularly the Colorado Plateau. Slot canyons are subject to flash flooding and commonly contain unique ecological communities that are distinct from the adjacent, drier uplands. Some slot canyons can measure less than 1 metre (3:ft) across at the top but drop more than 30 metres (100:ft) to the floor of the canyon.

Slot canyons around the world

Slot canyons are found in many parts of the world, predominantly in areas with low rainfall. Some of the best-known slot canyons are to be found in the Southwestern United States. Other significant areas include the Sierra de Guara in northern Spain, the Pyrenees on the border of France and Spain, and the Blue Mountains in New South Wales, Australia.

The largest known area of slot canyons in Australia is in the Blue Mountains, west of Sydney. They occur in a narrow band of sandstone that runs roughly 30 kilometres (19:mi) from east to west, and about 100 kilometres (62:mi) from south to north. The majority of these canyons are in the Wollemi Wilderness, and are difficult to access. A small number are regularly visited by canyoners on weekends in summer. The Grand Canyon, near Blackheath, has a tourist track along its rim,... ...read more