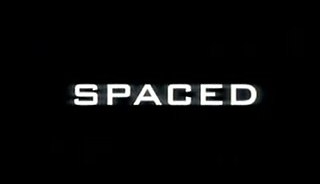 Spaced is a British television sitcom created, written by and starring Simon Pegg and Jessica Stevenson, and directed by Edgar Wright, about the (comedic and sometimes farcical and action-packed) misadventures of Daisy Steiner and Tim Bisley, two twenty-something Londoners who, despite only having just met, decide to move in together after she gives up on squatting and he is kicked out by his ex-girlfriend. Supporting roles include Nick Frost as Tim's best friend Mike, Katy Carmichael as Daisy's best friend Twist, Mark Heap as lodger Brian who lives downstairs and Julia Deakin as landlady Marsha.

The first series of the show, comprising seven episodes, premiered in the UK on Channel 4 on 24 September 1999, and the second and final series, also consisting of seven episodes, started on 23 February 2001 and concluded on 13 April.

Both series were nominated for the BAFTA TV Award for Best Situation Comedy.

Daisy Steiner and Tim Bisley are two London based twenty-somethings who meet by chance in a café while both are flat-hunting. Despite barely knowing each other, they conspire to pose as a young professional couple in order to meet the requisites of an advertisement for a relatively cheap flat in the distinctive building at 23 Meteor Street, Tufnell Park, owned by resident landlady Marsha Klein. Also in the building is Brian Topp, an eccentric conceptual artist who lives and works on his various pieces in the ground-floor flat. Frequent visitors are Daisy's best friend Twist Morgan and Tim's best friend Mike Watt. The latter ends up becoming a lodger after Marsha's daughter Amber Weary "flies the nest".

The series largely concerns the surreal and awkward adventures of Tim and Daisy as they navigate through life, come to terms with affairs of the heart, and try to figure out new and largely unproductive ways of killing time. Tim and Daisy repeatedly clarify that they are not a couple to everyone but Marsha, but despite this, romantic tension develops between them, particularly during the second series.

Main article: List of Spaced characters
This article is copied from an article on Wikipedia® - the free encyclopedia created and edited by its online user community. This article is distributed under the terms of GNU Free Documentation License.