Temperature record of the last 2,000 years 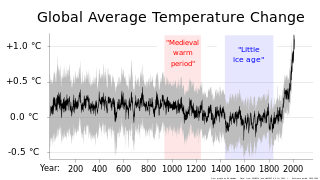 For information on the description of the Medieval Warm Period and Little Ice Age in various IPCC reports, see MWP and LIA in IPCC reports. Main article: Global temperature record Global average temperatures show that the Medieval Warm Period was not a planet-wide phenomenon, and that the Little Ice Age was not a distinct planet-wide time period but rather the end of a long temperature decline that preceded recent global warming.

The temperature record of the last 2,000 years is reconstructed using data from climate proxy records in conjunction with the modern instrumental temperature record which only covers the last 170 years at a global scale. Large-scale reconstructions covering part or all of the 1st millennium and 2nd millennium have shown that recent temperatures are exceptional: the Intergovernmental Panel on Climate Change Fourth Assessment Report of 2007 concluded that "Average Northern Hemisphere temperatures during the second half of the 20th century were very likely higher than during any other 50-year period in the last 500 years and likely the highest in at least the past 1,300 years." The curve shown in graphs of these reconstructions is widely known as the hockey stick graph because of the sharp increase in temperatures during the last century. As of 2010 this broad pattern was supported by more than two dozen reconstructions, using various statistical methods and combinations of proxy records, with variations in how flat the pre-20th-century "shaft" appears. Sparseness of proxy records results in considerable uncertainty for earlier periods.

Individual proxy records, such as tree ring widths and densities used in dendroclimatology, are calibrated against the instrumental record for the period of overlap. Networks of such records are used to reconstruct past temperatures for regions: tree ring proxies have been used to reconstruct Northern Hemisphere extratropical temperatures (within the tropics trees do not form rings) but are confined to land areas and are scarce in the Southern Hemisphere which is largely ocean. Wider coverage is provided by multiproxy reconstructions, incorporating proxies such as lake sediments, ice cores and corals which are found in different regions, and using statistical methods to relate these sparser proxies to the greater numbers of tree ring records. The "Composite Plus Scaling" (CPS) method is widely used for large-scale multiproxy reconstructions of hemispheric or global average temperatures; this is complemen... ...read more