The School of Athens

The School of Athens, Fresco in the Vatican made by Raphael between 1509 and 1511. 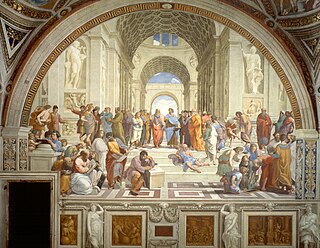 Fresco in the Vatican made by Raphael between 1509 and 1511 This article is about the fresco. It is not to be confused with The Athenian School. For the classical Athens school of philosophy, see Platonic Academy.

The School of Athens (Italian: Scuola di Atene) is a fresco by the Italian Renaissance artist Raphael. It was painted between 1509 and 1511 as a part of Raphael's commission to decorate the rooms now known as the Stanze di Raffaello, in the Apostolic Palace in the Vatican.

The Stanza della Segnatura was the first of the rooms to be decorated, and The School of Athens, representing philosophy, was probably the third painting to be finished there, after La Disputa (Theology) on the opposite wall, and the Parnassus (Literature). The painting is notable for its accurate perspective projection, which Raphael learned from Leonardo da Vinci (who is the central figure of this painting, representing Plato). The rebirth of Ancient Greek Philosophy and culture in Europe (along with Raphael's work) were inspired by Leonardo's individual pursuits in theatre, engineering, optics, geometry, physiology, anatomy, history, architecture and art. This work has long been seen as "Raphael's masterpiece and the perfect embodiment of the classical spirit of the Renaissance".