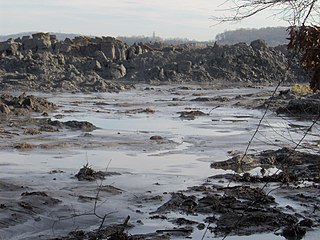 A toxic heavy metal is any relatively dense metal or metalloid that is noted for its potential toxicity, especially in environmental contexts. The term has particular application to cadmium, mercury and lead, all of which appear in the World Health Organization's list of 10 chemicals of major public concern. Other examples include manganese, chromium, cobalt, nickel, copper, zinc, silver, antimony and thallium.

Heavy metals are found naturally in the earth. They become concentrated as a result of human caused activities and can enter plant and animal (including human) tissues via inhalation, diet, and manual handling. Then, they can bind to and interfere with the functioning of vital cellular components. The toxic effects of arsenic, mercury, and lead were known to the ancients, but methodical studies of the toxicity of some heavy metals appear to date from only 1868. In humans, heavy metal poisoning is generally treated by the administration of chelating agents. Some elements otherwise regarded as toxic heavy metals are essential, in small quantities, for human health.

Tetraethyl lead is one of the most significant heavy metal contaminants in recent use.

Heavy metals are found naturally in the earth, and become concentrated as a result of human activities, or, in some cases geochemical processes, such as accumulation in peat soils that are then released when drained for agriculture. Common sources are mining and industrial wastes; vehicle emissions; motor oil; fuels used by ships and heavy machineries; construction works; fertilisers; pesticides; paints; dyes and pigments; renovation; illegal depositing of construction and demolition waste; open top roll-off dumpster; welding, brazing and soldering; glassworking; concrete works; roadworks; use of recycled materials; DIY metal projects; burning of joss paper; open burning of waste in rural area; contaminated ventilation system; food contaminated by the environment or by the packaging; armaments; lead-acid batteries; electronic waste recycling yard; treated woods; aging water supply infrastructure; and microplastics floating in the world's oceans. Arsenic, cadmium and lead may be present in children's toys at levels that exceed regulatory standards. Lead can be used in toys as a stabilizer, color enhancer, or anti-corrosive agent. Cadmium is sometimes employed as a stabilizer, or to increase the mass and luster of toy jewelry. Arsenic is thought to be used in connection with coloring dyes. Regular imbibers of illegally distilled alcohol may be exposed to arsenic or lead poisoning the source of which is arsenic-contaminated lead used to solder the distilling apparatus. Rat poison used in grain and mash stores may be another source of the arsenic.

Lead is the most prevalent heavy metal contaminant. As a component of tetraethyl lead, (CH
3CH
2)
4Pb, it was used extensively in gasoline during the 1930s–1970s. Lead levels in the a... ...read more