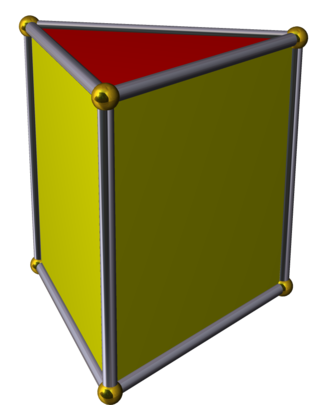 As a semiregular (or uniform) polyhedron

A right triangular prism is semiregular or, more generally, a uniform polyhedron if the base faces are equilateral triangles, and the other three faces are squares. It can be seen as a truncated trigonal hosohedron, represented by Schläfli symbol t{2,3}. Alternately it can be seen as the Cartesian product of a triangle and a line segment, and represented by the product, The dual of a triangular prism is a triangular bipyramid.

The volume of any prism is the product of the area of the base and the distance between the two bases. In this case the base is a triangle so we s... ...read more

Prism ... parallel surfaces are not prisms. The traditional geometrical shape of an optical prism is that of a triangular prism with a triangular base and rectangular...

Dispersive prism ... In optics, a dispersive prism is an optical prism, usually having the shape of a geometrical triangular prism, used as a spectroscopic component. Spectral...

Prism (geometry) ... be concave. A twisted prism cannot be dissected into tetrahedra without adding new vertices. The smallest case: the triangular form, is called a Schönhardt...

Triangular bipyramid ... infinite set of face-transitive bipyramids. It is the dual of the triangular prism with 6 isosceles triangle faces. As the name suggests, it can be constructed...