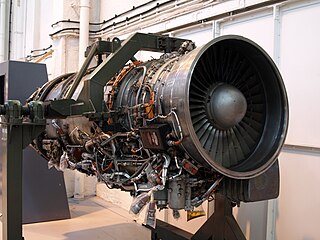 The Turbo-Union RB199 is a turbofan jet engine designed and built in the early 1970s by Turbo-Union, a joint venture between Rolls-Royce, MTU and Aeritalia. The only production application was the Panavia Tornado.

Advanced engine studies at Bristol Siddeley had already been done to support the BAC/Dassault AFVG and were based on the Pegasus two-spool arrangement. At Rolls-Royce, where the three spool RB211 engine was in development, 3 shafts were considered better. Rolls-Royce took over Bristol Siddeley in 1967 so the configuration for the RB199 was decided jointly, a three shaft engine.

The overall design concept for the international collaborative program, 3 shafts and a bypass ratio (BPR) of about 1.2, was decided by Rolls-Royce. The bypass ratio was chosen for long-range, low fuel consumption particularly when throttled back. The selected BPR also gave a higher reheat boost than with smaller values used on similar engines such as 0.4. The design of the individual modules was shared between Rolls-Royce, MTU and Fiat according to their existing expertise. For example, Rolls-Royce designed the fan using scaled-down Pegasus knowledge. They also did the combustor, high pressure (HP) turbine and reheat. The reheat used cold air combustion techniques, described by Sotheran and which were derived from their experience with ramjets and plenum chamber burning (PCB) in Pegasus front nozzles. Fiat had built turbines for the Viper so did the low pressure(LP) turbine as well as the final nozzle. MTU did the intermediate pressure(IP) and high pressure (HP) compressor, IP turbine and thrust reverser.

The first test run of the RB199 was done on 27 September 1971 at Patchway, UK. It was flight-tested using an Avro Vulcan with the engine installed in a nacelle that was representative of the Tornado aircraft. The Vulcan first flew with the RB199 in 1972.

Sand ingestion tests had been done and passed as part of the qualification for service introduction but operating in desert conditions with the Royal Saudi Air Force produced new problems. Frequent flying in air carrying different sizes of sand particles caused deposits on the HP turbine blades from sand passing through the combustor. In addition, sand carried with the cooling air through the blades blocked the cooling holes. Single crystal blades were being introduced to im... ...read more