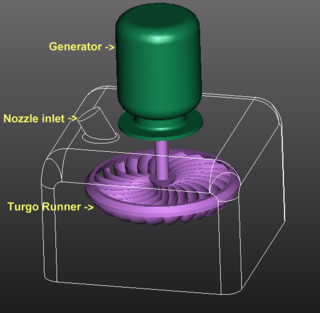 Designed in 1919 by Gilkes as a modification of the Pelton wheel, the Turgo has some advantages over Francis and Pelton designs for certain applications.

First, the runner is less expensive to make than a Pelton wheel. Second, it doesn't need an airtight housing like the Francis. Third, it has higher specific speed and can handle a greater flow than the same diameter Pelton wheel, leading to reduced generator and installation cost.

Turgos operate in a head range where the Francis and Pelton overlap. While many large Turgo installations exist, they are also popular for small hydro where low cost is very important.

Like all turbines with nozzles, blockage by debris must be prevented for effective operation.

The Turgo turbine is an impulse type turbine; water does not change pressure as it moves through the turbine blades. The water's potential energy is converted to kinetic energy with a nozzle. The high speed water jet is then directed on the turbine blades which deflect and reverse the flow. The resulting impulse spins the turbine runner, imparting energy to the turbine shaft. Water exits with very little energy. Turgo runners are extremely efficient

A Turgo runner looks like a Pelton runner split in half. For the same power, the Turgo runner is one half the diameter of the Pelton runner, and so twice the specific speed. The Turgo can handle a greater water flow than the Pelton because exiting water doesn't interfere with adjacent buckets.