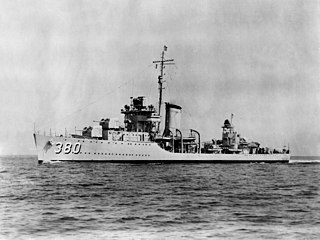 For other ships with the same name, see USS Gridley.

The second USS Gridley (DD-380) was the lead ship of her class of destroyers in the United States Navy. She was the second US Navy ship named for Charles Vernon Gridley. She served with distinction in the Pacific Theater during the Second World War and shared in the sinking of a Japanese submarine.

Gridley fitted out at Boston Navy Yard, and conducted shakedown in the Caribbean area until 27 October 1938, visiting Puerto Rico, Cuba, and Venezuela. She then underwent alterations at the Boston Navy Yard until 13 June 1938, when she departed that port, transited the Panama Canal, and entered San Diego harbor 5 July 1938. Joining Destroyer Division 11, Gridley spent the next months in tactical maneuvers off the coast of California, and 4 January 1939 departed with the Battle Force for combined maneuvers in the Caribbean. She participated in Fleet Problem 20 with the Fleet off Cuba and Haiti, after which she returned to Boston for repairs.

The destroyer again sailed into San Diego 13 July 1939 and became flagship of Division 11. She conducted maneuvers off California until 2 April 1940, when Gridley and other ships of the fleet conducted Fleet Problem 21 in Hawaiian waters. Subsequently, Gridley operated out of Hawaii.

Gridley cleared Pearl Harbor 28 November 1941 as part of the antisubmarine screen for the aircraft carrier Enterprise, flagship of Admiral Halsey, and after a stop at Wake Island, reversed course for Pearl Harbor. The Task Force was approaching that base on the morning of 7 December when the message heralding the beginning of the war was received: "Air raid on Pearl Harbor, this is no drill." Gridley entered the harbor next day to help protect against renewed attack, and during the next five months was occupied escorting transports and repair vessels to and from Pearl Harbor and South Pacific ports. Her last such voyage was completed from 27 May 1942 and 5 June 1942 she arrived at Kodiak, Alaska, with the cruiser Nashville. In the Alaskan theater, Gridley escorted transports and patrolled the Japanese-held islands of ...read more